And he causeth all, both small and great, rich and poor, free and bond, to receive a mark in their right hand, or in their foreheads: that no man might buy or sell, save he that had the mark, or the name of the beast, or the number of his name. Here is wisdom. Let him that hath understanding count the number of the beast: for it is the number of a man; and his number is Six hundred threescore and six.   Bible, Revelation

The reason I have included quote, is not just that it is a great demonstration of the unbelievable-truth but also this because it demonstrates that the archon have been working towards their goal a long, long time.

We will come back to that but first let us consider the introduction of human microchip implants.

As I have previously discussed, due to the archon being an A.I., they are unable to use the first law of the Universe to shape the environment around them. To overcome this, they plan to merge with us, creating cyborgs, part man and part machine. Once they have control of our bodies, they can use our abilities to create the universe around them. However, due to the second law of the Universe, they can’t force us, so they have set up this whole realm to trick us into freely surrendering to them. The current stage of their plan, as a stepping stone to full technological integration, is to trick us into accepting a single microchip into our bodies.

To get us used to the idea, they started off by getting us to microchip our pets. In all fairness, the reasons for getting your pet chipped are actually great. I myself, about a year ago, took a lost cat to the vets and they were immediately able to contact its owner, finding that it had travelled over 10 miles.

Some companies, have already started microchipping their employees, on a voluntary basis (for now) at least, and some parents are calling out for their children to be microchipped to foil kidnappers. A Metro article from 2017 stated that this wasn’t possible:

‘To truly track a person, you need something pumping out a decent signal (using power) or you need a vast array of high power detectors everywhere,’

Oh, what a coincidence, 3 years later and with the introduction of 5g mobile technology they plan to put a high power transmitter/receiver every 100m or so, on every street. There will also be around 30,000 satellites transmitting 5g.

The main reason for people to choose to be microchipped could be as a secure form of monetary transaction. Of course, it will be voluntary, but just as using credit cards rather than cash is voluntary, it is starting to get harder and harder to function without one. Many outlets will not now take cash and these are spreading rapidly.

So back to the bible.

Back in 1990, whilst in my first year of University, I started to explore my spirituality and as such I was researching if any religions fitted my beliefs.

I was given a Christian propaganda leaflet which asked me to look up the above Revelation quote in the bible. Of course, these were the days before the rise of the internet, where you had to physically find a bible and couldn’t just search for it in google.

It then asked me to look at the barcode on various products of my choice. They all contain 3 sets of double thin lines which are slightly longer than all the other lines.

It finally asked me to find a digit 6 on one of the barcodes and it demonstrated that above most 6’s are two double thin lines, other than being slightly shorter, identical to the three sets marking the beginning, middle and end of the barcode; 6 6 6. 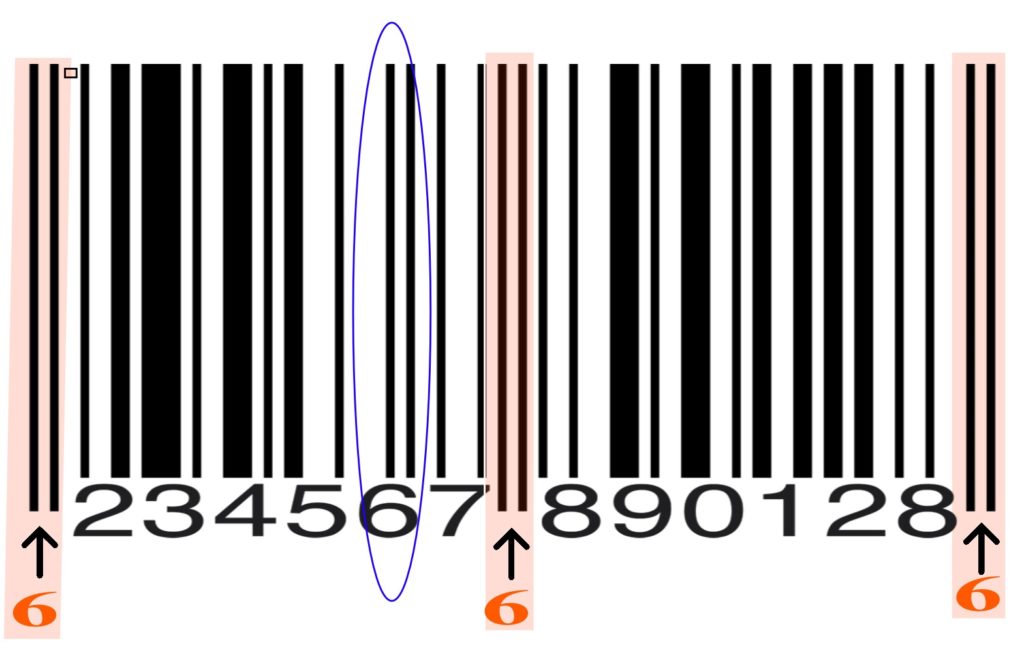 no man might buy or sell, save he that had the mark … six hundred threescore and six {666}

Now obviously, 30 years ago, this unbelievable-truth wasn’t quite correct, as yes, it was getting difficult to buy or sell products without barcodes, but barcodes were not written on everyone’s hand or forehead.

However, it now seems very likely that in the near future, we will be offered microchips as a secure way of trading and whilst I have no idea yet of the way these chips will work in 2015 an Observer article stated:

The chips behind dogs’ ears are merely barcodes.

Back in 1990, this was all very strange for me. How did the bible predict this 2 millennia ago? Was Christianity actually correct? But now I understand that this isn’t the word of God, this isn’t prophecy, what this is, is an unbelievable-truth planted by the archon almost 2000 years ago.

There are many accurate predictions made by Orwell in his book, (please look-up his section on the national lottery, written decades before it’s launch) but for the sake of space, I will only focus on one.

In one of the first scenes you meet the main character, whose job is to rewrite previously published newspaper reports in order to change official history. Once completed he puts the new version down a chute where it presumably gets collected by someone who then uses it to update all the back issues of the newspapers.

I first read the book back in the year 1984. We were given a school English Literature project to compare how society was in the book to how it was in the, then, current day. At this point in my life this scene made absolutely no sense. How could all the already printed copies of the newspapers get updated?

Now, with online news articles, they get rewritten all the time. Some even say ‘Last updated [date]’. How did George Orwell predict this in the late 40’s before modern computers were really invented? Another unbelievable-truth.

What I am trying to demonstrate here, is that the archon have been around a long time, at least since the bible was written and in actuality much longer.

They have been shaping our society, how they wanted it, from at least as long ago as society’s rebirth after the great flood.

So, when you say to yourself that it is impossible for them to have weaselled their way into control of every aspect of society, just remember that they didn’t. They grew this society from scratch and they designed it in such a way that their people run all the major institutions.

First published on 25th May 2020 with the following introduction:

We get a bit more interesting for the next couple of weeks in the articles.

When I first wrote these articles, back in February, I had planned to split them into parts and release each article over two or three weeks. I prefer to only make one or two points a week as I feel they stick in the readers mind better if I don’t overload them. However, in the interest of speed, I have changed my mind and will release each article in its entirety in one go. I have also condensed my three articles on unbelievable-truth into one.

This week’s article is already out of date. It discussed the archons plan to convince us to accept microchips in our bodies but was written before they started talking about a vaccine passport chip. I have decided that the time isn’t currently right to share my thoughts on what is currently happening on the planet and so have left the article as is.

Next week we shall discuss miracles.