The Hack Part 4
The Lord Of The Rings 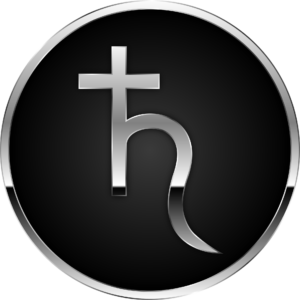 Image by Peter Lomas from Pixabay

The generally accepted, modern day, symbol for Saturn is a scythe attached to a cross.

No-one can say for sure what this symbol means. Some say the scythe represents the soul, for others it represents death, maybe it is far more literal and merely represents the rings that cradle the planet Saturn.

In more ancient symbols of Saturn we do indeed see a planet sat in a cradle. Sometimes the cradle is extended, it’s two ends becoming horns, other times the horns are replaced by twin towers, or wings.

The astrological star sign Capricorn is ruled by Saturn, leading to the goat being a further representation of Saturn. This is where we start to see the links between Saturn and Satan. Satan, also often being represented by the goat. 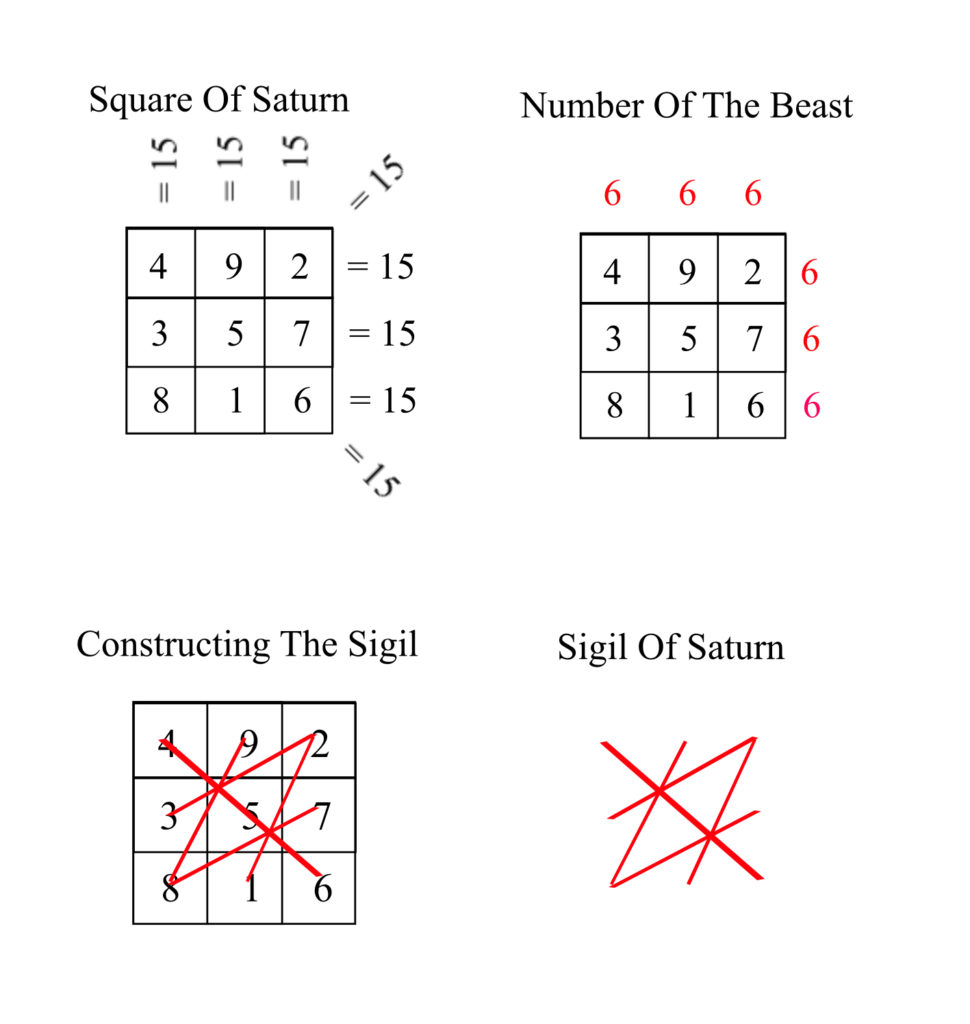 A further link between Saturn and Satan is the Square of Saturn, a 3 x 3 magic square, where each row, column and diagonal adds up to 15. Numerologists would then further reduce each of those 15’s to 6’s by adding its digits 1 and 5 together. This would leave each side showing 666.

Another symbol, the ‘Sigil of Saturn’ is based on the square of Saturn and made by drawing lines connecting the number 1 to 3, 4 to 6 and 7 to 9.

Staying with our number 6 theme, the six-pointed star known as a Hexagram is also known as the ‘Talisman of Saturn’.

Now, if you remove the six outer triangles from the hexagram, you are left with a hexagon, another symbol of Saturn. 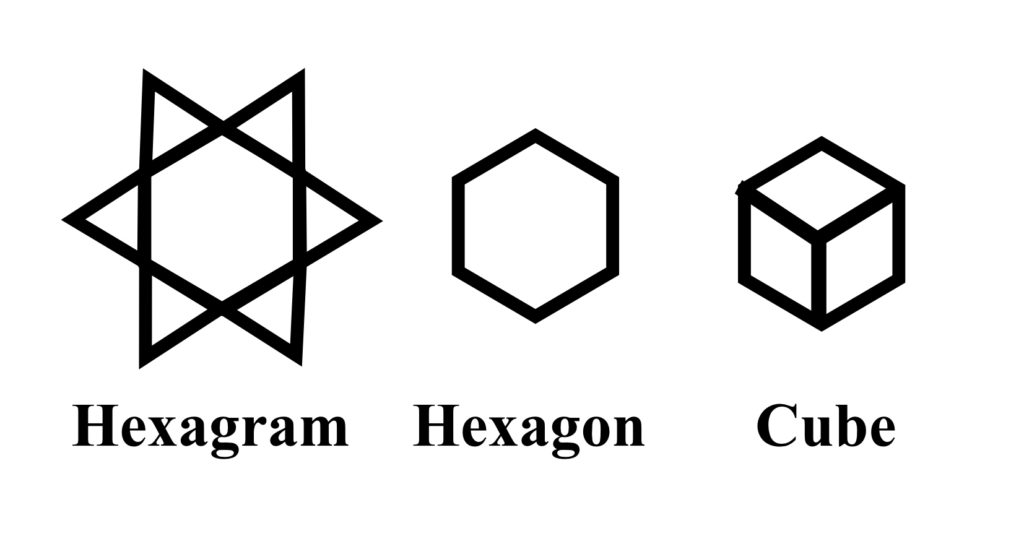 Going back to our modern-day symbol of Saturn, perhaps the cross, which is attatched to the scythe

, is the dark cube unfolded.

At this point we have to ask ourselves what Star Trek was trying to tell us with the Borg, a race of Cyborgs who, just like the archon, want to ‘assimilate’ the human race to also become cyborgs and whom travel round in a dark, cube shaped spaceship, the exact representation of Saturn.

Given that we know one of the symbols representing Saturn is a hexagon, what I am going to tell you next was too far-fetched for even me when I first heard it, probably 15 or 20 years ago.

On the pole of Saturn, so they said, the cloud formation forms a giant hexagon, far larger than the planet Earth, that never moves. I have to admit I didn’t even waste my time doing any research to find out if this were true. Believe it or not, even I, don’t believe everything that I read on the internet.

Fast forward to June 2019, all thoughts of Saturn’s alleged hexagon completely forgotten and, out of the blue, Nasa releases new pictures of Saturn. You’ve guessed it, way over a decade after being told about this eternal, hexagon, it is still there, and this picture isn’t evidence from some two-bit conspiracy theory site, this is an image from the official NASA site itself.

So, what is going on here?

We know from experiments with sound waves that they can create standing wave patterns, different patterns are created for different wave frequency.

In fact, those standing waves can even occur as hexagons with the right frequency of sound.

With its rings, Saturn resembles a huge satellite dish and, indeed, that is exactly what it is.

I have previously discussed, how the ancient gnostic scriptures describe how the archon have made a copy of the Universe.

They are not making this copy from scratch, instead they are amending the real Universe.

Saturn picks up the source code from the real Universe which is being transmitted by the sun. It then amends the code to create an ‘archon friendly’ copy of the Universe. Finally, a huge transmitter at Saturn’s pole beams out the corrupted source code toward Earth.  A by-product of this corrupted code leaving Saturn is a standing wave hexagon formed in its clouds where it leaves.

On Earth, we humans, having been cut off from the real source code by the moon, now, instead, tune in to this corrupted version and find ourselves in the false reality of the archon.

The Universe is made up of a pretty much infinite amount of space spread over a pretty much infinite spectrum of different frequencies. The processing power for the archon to change all the Universe or even all the frequencies in the region of our planet Earth would be humongous, way beyond the ability of the archon. They have, therefore, concentrated on one planet and just the frequencies of light, with a few frequencies below to create a living space for themselves and a few frequencies above, which we shall discuss later in the section on the afterlife.

This has given rise to the stories of Hell below us and Heaven above.

In order to keep us trapped in their false reality they had to stop us perceiving any frequencies of the Universe which they had not hacked. They needed to try to reduce our physical senses to receive information, only from the frequencies of light. Hence the archon have drastically genetically modified the human race, trying to deny us of our many original senses, which had once let us perceive many of the other frequencies beyond those of light.

A second goal of the genetic modification was to reduce our lifespans. If we still had lifespans of around 1000 years, as did the characters in the early part of the old testament, then, with the wisdom of a millennia, it would be far more likely we would see though the archon hack than it is now, where we generally live for less than 100 years, have our memories wiped, then return here for another 100 years or so.

We can now fully understand why Lucifer is named the ‘bringer of light.’

This name is not some deep reference to some Star Wars style ‘light side of the force’, it is far simpler and far more literal.

For further information on this week’s subject I recommend watching ‘Saturn Isn’t What You Think It Is Either‘ by David Icke.

This coming Wednesday will mark the one-year anniversary since I published my first article.

Coincidentally, this weekend I finished writing the final article in the hack section, which means that, even though I have yet to publish all the articles, in essence the site is now coherent with all the information required to explain what I am talking about.

I use the word coherent rather than complete as I will continue adding articles to the ‘life’ section, indeed, on my spreadsheet of topics to discuss, I am less than half way through that section.

There is one more section to add to the site and that is the introduction (of Disco Mike). All being well you will start seeing articles appearing in that section in the next couple of weeks.

It is sort of fitting for what I am saying that the first article which I published was the epilogue and I shall finish this project with the introduction.

You finally also, this week, get to see how bad my artwork is with my wonky hexagram. If anyone, with talent, would like to donate me their time and create me a proper graphic I would be very grateful. It must be suitable as a black and white image in the book which this site will eventually become.